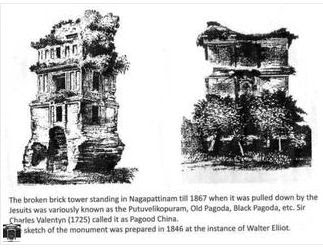 My recent references to the Nagapattinam vihara has K.R.A. Narasiah adding more information citing Noboru Karashima, Y. Subbarayulu, Dr. D. Dayalan of the Archaeological Survey of India and, long before all of them, Walter Elliot writing in the Indian Antiquary. Elliot wrote that a strange shaped masonry tower called the Chinese Pagoda was demolished in 1867. In 1846 he had had a sketch of this tower prepared and this sketch later found a place in Dayalan’s Archaeological Sites and Evidences of Maritime Buddhism in South India (my illustrations today).

Karashima, that well-known Tamil scholar, wrote in a paper in 1992 that in an exhibition in Tokyo of Rockefeller-owned artefacts he had found a bronze standing Buddha similar to ones found in Nagapattinam which are now in the Government Museum in Madras. The Nagapattinam bronzes have been dated to the 11th Century. The bronze exhibited in Japan was on a lotus-shaped pedestal and it had a Tamil inscription that Karashima read:

and translated as follows:

1. (This is) the Alvar for a festival procession of the temple of Akkasalai-Perumpalli in Rajendra Chola-Perumpalli. This Alvar was set up by Nalan-gunakara-Udaiyar of Chiruthavur.

2. Let it be auspicious! (This Alvar called) Akkasaikal-nayakar is for all the Padienvishayam.

Narasiah says that ‘Padinen vishayam’ is a merchant guild and linked as it is with Akkasalai (a mint or goldsmithy) was probably a guild of jewellers. They probably raised the palli (a Buddhist temple) in Rajendra Chola’s time and installed this bronze, or one similar to it, as a deity in it.

Given what Chithra Madhavan contributed to this column on February 13, are we talking of two Buddhist Viharas in Nagapattinam?

courtesy: Mr.S.Muthia published in Madras Miscellany in The Hindu 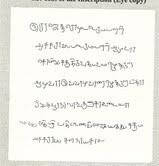 How a Pandya ruler tackled rebellion