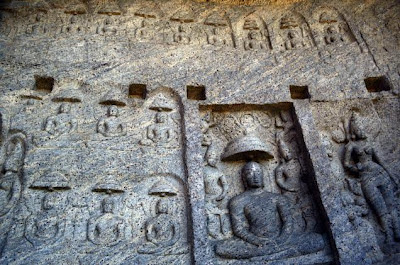 Photos: Lakshmi Sharath
Chitrala A heritage tour to this village takes us to a world of cults, legends and myths

It’s noon and the sun is at its peak. A group of heritage enthusiasts is climbing a small hillock in a village called Chithral near Kanyakumari. I trudge along with the group and pause for a moment to catch my breath. The scene is virtually breathtaking — the sky is clear, floating clouds touch distant mountain peaks, the greenery is refreshing, and the breeze comes calling. The trees create a canopy, sheltering us from the mid-day sun. For a moment, I forget the heat, and lose myself in the journey, for, as always, these journeys are filled with legends and myths.

Chithral is part of the itinerary of the Naanjil Naadu tour, organised by INTACH, Tamil Nadu, and we set out to explore heritage among caves and hillocks. V. Vedachalam, retd. senior epigraphist from Tamil Nadu State Archaeology Department explains to us that the site was known as Thirucharanattumalai in the ancient times. “Jains believe this is the abode of the monks who had lived in the natural caves here. In fact, “charanathar” in Jainism refers to celestial beings who fly on the skies and are seen in places of worship — mounds or mountains, sometimes inside towns and living spaces too,” he says.

We continue to trudge along a bit until the rocks part ways and create a narrow tunnel-like approach for us. And then we see it. The rocks are carved with bass relief sculptures depicting Thirthankaras and yakshis. There is the serene Mahavira, the snake-hooded Parshvanatha along with Neminatha, the yakshis — Padmavathy and Ambika, also known as Dharmadevi looking out into the open. Hillocks surround us in the distant horizon as we see pools of water reflecting the colours of Nature.

Vedachalam says the sculptures date back to the 9th and 10th Centuries as inscriptions refer to the patronage of the AY dynasty ruler, Vikramaditya Varaguna who reigned around the period. More inscriptions written in Vattaezhuthu (one of the oldest Tamil scripts) refer to monks and nuns who lived here and also speak about a well known Jaina monk Akshanandi, who was a donor and a patron.

Right atop the cave is a small temple dedicated to Bhagavathy. Vedachalam says it was earlier a Jaina temple, and the yakshi cult gave way to the Bhagavathy cult over the passage of time. A 19th Century inscription in Malayalam belonging to the Travancore king Moolam Thirunal Maharaja mentions this shrine.

As we sit in the cave gazing at the sculptures, Vedacahalam points to the carving of yakshi Ambika or Dharmadevi and narrates the story about her cult. “It was believed that Ambika was a housewife who was thrown out of the house by her husband as she had given away all the food to Jaina monks. As she walked away with her children, people noticed her divine powers and started worshipping her.

One version says the trees flowered and gave her fruits and that even a dry reservoir suddenly filled up with water, while another version mentioned that a ‘kalpavriksh’ or a wish-fulfilling tree gave her all that she desired. When her husband got to know about her ‘divine powers’, he came over to call her back, but she committed suicide and became a yakshi,” says Vedachalam, adding that today one can always see Ambika as a yakshi with Neminatha and is usually flanked by her children and a lion, which is her vehicle. Inscriptions in Vattaezhuthu were found here with references to the yakshi cult as well.

We spend more than a couple of hours here, losing ourselves in a world of arts and cults, completely cut off from civilisation. For miles and miles around, the mountains and forests circle us as we wonder if the celestial ‘charanathars’ are watching over us as we walk downhill.