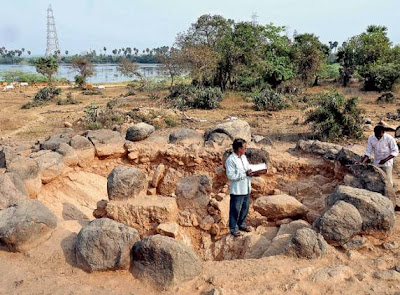 Geoarchaeologist Dr S. Rama Krishna Pisipaty of Sri Chandrasekharendra Saraswathy Viswa Mahavidyalaya, Enathur, at the turtle-shaped memorial excavated by him at Vadamangalam village. —DC
Barely an hour’s drive from Chennai city, archeologists have unearthed what could perhaps be India’s earliest human settlement, dating back to 3,000 years ago.

A massive 24-m-long turtle-shaped tomb was excavated from the banks of a lake at Vadamangalm village in Kancheepuram district about 80 km from here. While no human skeletons have been discovered yet, initial findings indicate that the people who had inhabited the ancient megalithic site knew mathematics, astronomy and astrology.

He added that it was for the first time in the world that such animal-shaped memorials without human skeletal remains, has been found.

“The turtle-shaped tomb probably belonged to a prominent person at the time. Though there are no inscriptions as to why it was built in the shape of a turtle, it is evident that the stone memorial resembles the ‘Kurmachiti’ — the turtle shaped fire altar of Vedic culture,”said Dr Rama Krishna, who had surveyed the megalithic burial site for a year before excavating the structure in February. “Further studies will have to be carried out to find signs of human habitation in the viinity,” he added.

The 24-meter diameter of the turtle might denote the 24 hours of a day, said the professor who hopes to find some astronomical and astrological significance with further research.

Another structure, vaguely resembling the head and tail of a reptile was also found at the mass burial site by the professor and his team of local workers.

Apart from knowledge of numbers and astronomy, the people of the megalithic era had managed to evolve a good agricultural system.

They also bred domestic animals, fished and hunted, the professor said. “The memorial with its iron tools, terracotta beads, terracotta tub and other offerings shows that the ancient residents of Kancheepuram had started bestowing importance to their deceased.

The capstone, used as a slab on the floor of the turtle-tomb appears to have been brought in from elsewhere. They had also used hematite stones in four corners,” Dr Rama Krishna said.

The burial urns, recovered from among the five memorials excavated by Dr Rama Krishna, were black and red in colour, displaying characteristics of the early iron age.